I would really like to tell you about the very big fish my husband caught – and lost – last week. Last Wednesday we decided to take our boat out for what very well might be the last time before we have to put it away for the winter. The day began well. A light breeze rippled the water softly. Puffy white clouds decorated the azure sky, as the sun gave just enough warmth to make it comfortable.

We made our way from Harbour Cove where we keep our boat, up Rockhold Creek and past the rock wall into the gorgeous Chesapeake Bay. The water level was high after all the recent storms, but the waves were gentle. Tom put out the two planers and we slowly glided north toward the Bay Bridge reveling in the quiet and serenity. We seemed to be the only boat out there. It was lovely.

The only thing marring an otherwise perfect outing was that there were no fish to be had. So, after a couple of hours Tom began pulling in his lines. He had pulled in the first line and had just picked up the second when he caught a big one! A very big one. 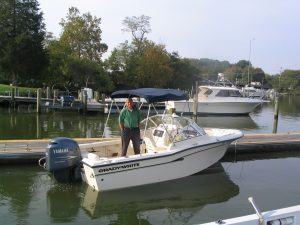 Now, I must preface this with the fact that I am not, by anyone’s estimation, nautically savvy. I cannot drive the boat. I cannot swim. And, honestly, I cannot even stand up on the damned thing without becoming perilously close to going over the side.

Tom on the other hand has always had what are referred to as ‘sea legs’. He’s a wonder. He can pretty much bring in fish or hand me a soda or steer the boat and do many other amazing feats without difficulty while standing up. I’m always in awe of this ability.

That day, however, just as he was pulling in the line, shouting for me to get the net, a speed boat roared past and its wake caused our little eighteen-footer to roll dangerously. Tom lost his footing and over the side he went.

Normally, I don’t do well in crisis situations. I am usually the first one to panic. So, I am proud to say that in this instance I did have the presence of mind to turn the key and stop the engine. Then I dithered around, trying to keep my balance, and wondering what to do next.

Tom, who thank God hadn’t hit his head and does know how to swim, was treading water. As he directed me with some agitation to toss him one of the seat cushions that floats so nicely and extend the ladder so he could climb back in to the (well, I won’t quote him verbatim here because my granddaughter may read this) colorfully described boat, I’m pretty sure he was wishing he had married someone a little less cerebral and a lot more physical.

However, I managed these feats without joining him in the water and he climbed back on board, dripping and not in the best of moods. The fish, after having a good laugh at our expense, departed to depths unknown taking the planer with him. On the bright side, Tom was all right. And he had managed not to lose his glasses or his wallet. And he is still speaking to me. So, I call that a win.

As I said at the beginning, I would like to tell you this story. It’s way more interesting than my real life. However, in all honesty I can’t. We did go out. It was a beautiful day. No one went over the side. Tom didn’t catch a fish. He didn’t even get a nibble. The most exciting thing that happened was my sighting of a huge stork that turned out to be some guy pulling in a crab line. I have an appointment with the eye doctor next month.