On the anniversary of a death, it’s very easy to recall all of the shock, the disbelief, and finally the deep sadness that the day evokes. And I am afraid I sometimes dwell too much on the event and not enough on the life. I have written before about May 22, 1968, that last light of day when my brother, Tim, was taken from us. Now I would like to recall other days when we were very young, before teenage angst and civil unrest and the Viet Nam War; some good, some not so much. But they were mostly brighter days that bring a smile. 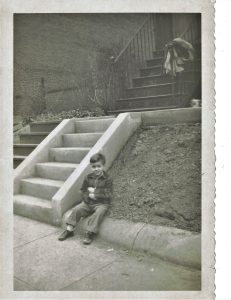 I was born two and a half years after Timmy and we, apparently, were in sync from day one. For example, I didn’t talk until I was well past two years old. The doctor seemed a bit worried, my mother did not. According to Mom, I didn’t need to talk. Tim did all my talking for me.

I remember a friend in the neighborhood. We called him “Mr. Man Across the Street”. I have no idea who he was or where he lived, but we would wave and holler ‘hello’ to him as he strolled down the opposite sidewalk. He would smile and wave back and on good days he would roll nickels across 20th Street to us.

There was the old lady that lived next door in a house that sat far back from the street. She did not smile and wave. It certainly never occurred to us that she might send a nickel our way. I never saw her dressed in anything but black. Someone (very possibly my older sister) convinced Tim and me that she was, actually, a witch, although I never saw a broom and I don’t remember any warts. But we were pretty darned scared of the poor woman who probably just wanted to be left alone.

Summers were fun. We stayed outside most of the time playing with our neighbors, Bobby and Earl. Occasionally, the city would open the fire hydrant in front of the house so we could run in the water. High old times indeed! Tim and I got to share a popsicle on the front steps once a week. We caught lightening bugs and went with my dad when he fished in the Tidal Basin. We watched fireworks on the Mall and bought ice cream cones that came with ice cream cubes from the Peoples Drug Store around the corner. On very hot nights Mom would rub on our backs with alcohol to cool us off so we could get to sleep. I can still remember the smell.

Christmas mornings were special. We had no fireplace, so our stockings (Dad’s socks) were hung on the end of our beds. Tim, Chris and I got to open these before anyone else was moving. It was our special time. And now that I think about it, I don’t understand why the custom didn’t continue. It certainly gave my parents an extra half hour or so before we charged into their bedroom.

I remember that Tim and I spent several nights one winter synchronizing our dreams. We’d decide before bedtime to dream of the same thing and our stories always meshed in the morning.

I have one particular memory of that little house and my brother. I was a rather trusting little girl. We were playing inside, so I’m guessing the weather was coldish. I was sitting in the big chair in the living room and Tim decided he would do a little target practice. I was the target. My little toy broom with the red handle was the projectile. He promised that he would miss. So I sat there and let him throw it. Well, his aim was a little off and he whacked me right in the forehead. Copious amounts of blood and a none-to-pleased Mother ensued. He did feel bad and his aim certainly got better over the years, but I never agreed to be a target again.

We went to Calvert School which was the parochial school attached to St. Matthew’s Cathedral where we went to church. We walked to both. And much of what I remember centers around them.

My most horrid memory was the day he fell on the playground and hit his head. The playground for the girls, if it could be called that, was the small yard in back of the school. The boys played in the small yard across the alley from our area. I was in first grade and standing by myself when there was a bit of commotion and suddenly I saw two eighth-grade boys carrying my brother, unconscious, possibly dead for all I knew, across the playground into the school. I have to hand it to the nuns, they did an excellent job of ignoring me. Not one of them thought to reassure me that he would be okay, which, thank God, he was. But that picture is engraved on my mind to this day.

Much more amusing memories come to mind. Tim was an altar boy at St. Matthew’s which is a large church with a large altar. Well, his first time out, he must have been all of eight years old and on the small side, he went behind the altar to get the water and wine as was done in those days, and he didn’t come back. The priest finally had to go get him. We never found out what he was doing. Perhaps he saw something that struck him as interesting? Or he simply forgot that a whole church was waiting? Who knows? This was my brother to a tee – easily attracted to foolishness, as one nun told my parents. But, really, he was a little boy with a vivid imagination and no sense of time.

I love one particularly ridiculous story which I’ll preface by saying that as a whole, we were fairly literal children. My mother and our neighbor, Mrs. Smith, shared the walking to and from school responsibilities. Someone (probably Mother) from our house got us there and Mrs. Smith walked us home. I’m a bit fuzzy on whether I was part of this particular screw up or whether I wasn’t yet going to school. At any rate, my mother was fond of singing and, apparently, was belting out “I’ll be down to get you in a taxi, honey” as Tim was leaving for school. When Mrs. Smith got there in the afternoon to walk him home, he refused to go with her. He told her Mom was coming in a taxi and he had to wait for her. She, of course, had to drop whatever she was doing, pack up my sister and, probably me, and fetch him – sans taxi. She dined out on that story for years.

It’s been over fifty years, but I still miss him. I miss playing in the rain and coming home to tomato soup and grilled cheese sandwiches. I miss our Sheena Queen of the Jungle and Tarzan act as we ran through the woods near our home in College Park. I miss being arctic explorers trudging through a foot of snow for what seemed like hours. And I miss his smile, his laugh, and his always being there. I want his grandchildren to know what a glorious nut he was and what a wonderful big brother I had. Rest in peace, dear brother. You are not forgotten.