I lost a good friend last week. My sister-in-law, Jane Petersen Mongelli, finally surrendered to cancer after a two year battle she always knew she would lose. But fight it she did because that was Jane. She left us peacefully with her beloved daughters at her side on Wednesday May 17th. 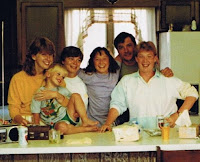 When I met my husband, Tom, I was a bit of a mess. I was all of eighteen, shy and insecure, lacking quite a bit in the way of social skills.

And so as much as I love Tom’s family now, I have to say that at the time we were first introduced I found them all incredibly intimidating. But Jane reached out and took me by the hand and made my entry into the Petersen clan a little less daunting.

Looking back, I think part of this may have been Jane making sure that her brother wasn’t dating some lunatic who would break his heart. She was always protective of those she loved.

I am so fortunate that we became close friends and have remained so for almost fifty years. Jane could on occasion a bit of a handful. She could be stubborn and hard-headed one minute, laughing and helpful the next. But she was always Jane. There was never pretense, no dissembling. With Jane what you saw was what you got. And what you got was a woman fiercely loyal to her family and friends, who loved a good party, good food, music, political discussions, and a bit of catty gossip.

And of course, Jane loved her girls, Courtnay and Terry, and her grandkids, Ben, Nick, Abby and Grace. They made her life complete. She was so very proud of them all.

Well, I firmly believe that Jane has now been reunited with her husband, John. He is singing a little Willie Nelson as he brings her a cup of coffee. She’s smiling. And she’s keeping a close eye on us all.