Well, we got back from a family vacation last weekend. I believe a good time was had by all. Tom and I relaxed. We read, played Bananagram, and did crossword puzzles. The kids swam, rode bumper cars, and mini-golfed. My birthday came during the week, so we had cake!

No one got sunburned. No one stepped on a nail. No one had to visit a medical professional for a tooth repair, strep throat, or urinary tract infection – all of which we had done in previous years. In fact, I didn’t even open the first aid kit. The only down side was the impressive lack of fish in the Atlantic Ocean willing to play tug of war with a fishing pole. Perhaps they didn’t know my son is a fan of catch-and-release. Perhaps they are just sadistic little teases. However, if the worst I can say about this vacation is no fish were caught, I am a happy camper. 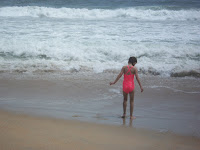 Having time on my hands these days, sort of, I spent the week before we left planning a treasure hunt for our granddaughter, Sophie. She is eight now and loves to play pirate. She is constantly digging up our yard searching for treasure or insisting that I be her first mate and stand under the wooden play house. Ideally she would like me to climb up and be a look-out, but we first mates are getting too old for that.

So, I drew a map depicting the beach at Nagshead. It included a pirate ship sailing the bounding main, three rather obvious clues, and a large X marking the spot. I then aged the paper in tea and singed its edges. I also aged a little wooden casket, filled it with silver and gold dollars and an old locket that belonged to my aunt in which I put pictures of Sophie’s parents. I locked it with an old suitcase lock and tied the key to the string around the map.

On our last full day, Matt and Theresa buried the treasure on the beach while I hid the map in the laundry room. I asked Sophie to help me with something and we ‘found’ it. I have to say this for my granddaughter. She is smart as a whip and you really cannot fool her most of the time. Unfortunately, Sophie had seen the key in my office. But she is a sweet girl and a dead game sport, as my mother used to say (if anyone knows the etymology of this phrase, I’d appreciate hearing from you), so she played right along.

First, she said the map must be meant for someone else. I reminded her that Pirate maps are fair game, so we kept the map. She told me that the key was the same as the one at my house. She posited that the pirates must have broken in, made a copy of the key, and tied it to the map. Then she laughed and said, “No. That’s too farfetched!” You gotta love this kid.

Sophie showed her parents and excitedly pointed out that it must be a map of the beach and the trail must be the one in front of our house. As we walked to the beach she looked for clues along the way. When we got there, we found the bucket of blood, the peculiar foot garb, and the orb of the sea, but couldn’t locate the X. It was not in the exact location of the map. We decided that sands shift, so we looked further and, lo and behold, a large seaweed X marked the spot indeed.

She dug up the treasure, opened the casket and threw the coins in the air – just like in a movie. She loved the locket and couldn’t get over the fact that the pirates had her parents pictures in it. We decided that these were magical pirates who could see into the future.

Now here is the best part of my week. Later that day Sophia told her mother not to tell me, but that she knew all along that I set up the map and the treasure so she would have some fun on her last day. Life does not get any better.